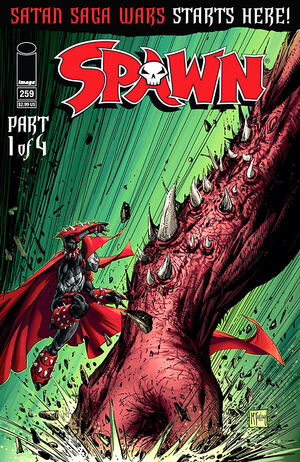 You keep her. The costume is mine.

Wanda Blake is approached by Satan. She learns he has big plans for her as he drags her away.

Elsewhere, Spawn fights his way past Demons as he is determined to kill Satan and retrieved Wanda. He realizes no demon can stop him as his suit is too powerful. He confronts Satan and demands the return of his wife. Satan refuses to kill Spawn as he wants his Suit. Satan has Wanda brought out and reiterates his offer-- an exchange of his wife for his costume.

Spawn considers the deal but turns it down as he realizes he and Wanda would both be killed if he didn't have his suit. Satan accepts his response as a declaration of war.

Beginning "The Satan Saga Wars!" -- The Four-Part story chronicling the final fate of Wanda Simmons's soul! Starting with this issue, Al Simmons will come face to face with Lucifer for the very first time. A battle of epic proportion will begin and the prize is... Wanda's soul. This story will forever change the way Spawn will live his life.

Retrieved from "https://imagecomics.fandom.com/wiki/Spawn_Vol_1_259?oldid=67670"
Community content is available under CC-BY-SA unless otherwise noted.