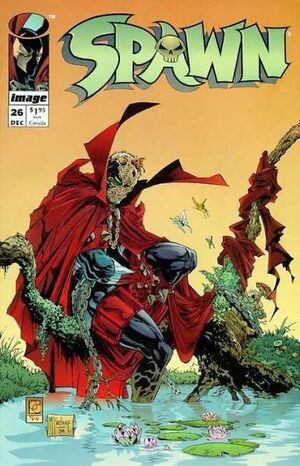 I can't see the bitch Angela wriggling her way out of this one. Don't worry about the check. It's all taken care of.

Appearing in "the DARK"

Plot Synopsis for "the DARK"

In Hell, Malebolgia laughs at Spawn's situation. He knows he will either feed his army by killing bad men, or use up his power and thus return to be an officer in his Armageddon war on Heaven.

Fred Barnett is a man who lost his job when his wife left him. He can no longer take care of his child or his life. The court orders for his daughter to be taken from him. When one of the street bums brings Fred to Spawn, he turns a cold shoulder and tells them he's not a savior and they need to figure out their own solutions.

Cogliostro finds Spawn and tells him he's doing things the wrong way. He explains he could have set the rules of how he returned to Earth and in what condition, instead he just accepted what the devil gave him. This inspires Spawn to further start taking things into his own hands. Cog warns him not to become cocky, and to instead accept that he can give people hope. He also warns him he's about to head to Heaven.

Spawn is transported to Heaven where he meets Gabrielle. She asks about the whereabouts of the Dimensional Lance after his battle with Angela.[1] Spawn tells her he doesn't now but he did see it and touch it which transported him to a strange dimension. Gabrielle thanks him and Spawn is teleported back to earth.

He's confused how Cog knew he would have been sent to Heaven and then teleported back. Cog explains he doesn't have to just do what he's told.

In Hell, Malebolgia ponders how "power" corrupts individuals. He gives it to them and in the end they make their own bed in it. Spawn reads a newspaper that Fred Barnett commits suicide. He's suddenly overwhelmed with guilt that he didn't do anything to help him.

Retrieved from "https://imagecomics.fandom.com/wiki/Spawn_Vol_1_26?oldid=64205"
Community content is available under CC-BY-SA unless otherwise noted.