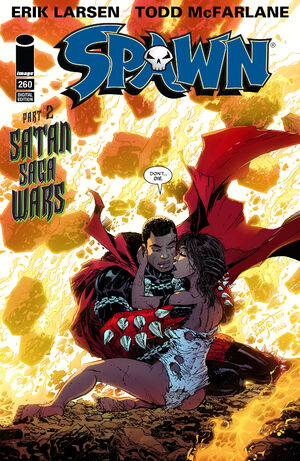 You can't let me leave here. That wouldn't show your army how powerful you are. And you need that power to keep them scared.

Spawn announces he will not give up his suit to Satan. He knows his demon followers will view him as weak if Satan gives into a mortal. He also thinks he won't attack because Satan doesn't want to harm the suit, though the time for that is running out. He unleashes his power and uses his chains to teleport himself and Wanda away. Satan turns to Hellion, furious, and orders him to chase down and capture Wanda, as Spawn will soon follow.

Spawn has an intimate moment with Wanda. She admits he knows he's always cared about her. That's why he kept his distance when she was with Terry, he wanted to protect her feelings. A demon approaches them and he quickly eviscerates the demon.

The two escape and tells her that he's done hiding. He's suddenly struck by an energy blast.

The legendary Todd McFarlane and Erik Larsen join forces for a historic and show-stopping collaboration of titanic proportions in an epic display of creative talent on SPAWN!

Retrieved from "https://imagecomics.fandom.com/wiki/Spawn_Vol_1_260?oldid=67671"
Community content is available under CC-BY-SA unless otherwise noted.