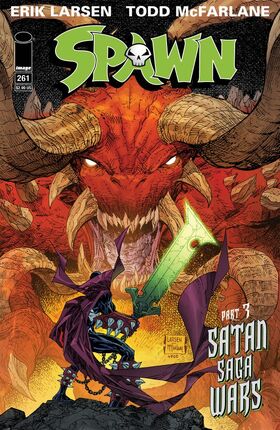 But you've failed! By wasting the powers given to you, if you won't use them to serve hell... then it's time I took them back!

In Hell, Wanda Blake screams as Bingo and various Demons attack Spawn. Satan soon joins in as the two puff their chest and gesture they will be able to defeat the other.

Elsewhere in Hell, Hellion goes searching. He remembers that Wanda was also looking for something when he first found her. He digs into the ruble and finds her unborn child laying there.

Meanwhile, Spawn and Satan are in a deadlock over who can keep the suit. Hellion arrives and reveals he has their unborn child. Satan offers him one more time the chance to leave alive with his wife and child in exchange for giving him the suit. Wanda tries to warn him its not what he thinks but it's too late, Spawn relinquishes and energy burst to give in to Satan's demands.

The race to escape Hell is thwarted by Satan himself. Will Al and Wanda get their happily ever after?