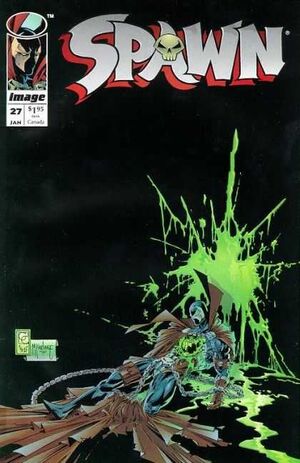 But this Spawn. He knows Terry. How? I'll focus on finding that answer.

In Massachusetts, The Curse sits in his apartment and mutters about religion and how Spawn is the chosen one. In order to prove he is worthy, he heads to New York City to battle Spawn. Upon arriving, he's offered drugs and sex. He prays for the sinners and says they will be saved.

In the Bowery Alleyways, Spawn resurrects Bobby after being killed in the Youngblood aftermath.[1] He uses his Necroplasm to resurrect him as he doesn't want to see his friends hurt.

While he's weakened, Spawn is suddenly struck with a laser from behind that blasts a hole in his chest. Spwan falls to the ground. The Curse declares that Spawn is a false prophet for falling too quickly. He disappears with his cult of bum followers that defected from Spawn to show The Curse where Spawn was located.

Wanda Blake talks with Terry Fitzgerald on the phone. She asks if he's found any more leads as to why the CIA and Mafia were after him. Terry replies he has no more information. Terry explains it's strange that everyone stopped looking into him once Spawn appeared. It was further confusing as to how Spawn knew his name. As they look through the files and Wanda secretly gets the idea that she can speed up the research by talking to Spawn directly.

The Curse recalls his younger years. He remembers thinking Heaven wasn't listening so he cut out an eye and sliced his face to show Heaven he could make personal sacrifice. When it wasn't enough, he cut off his arm. Eventually he had cybernetic enhancements such as his cannon arm installed.

In the present, as The Curse gives a sermon in the alleyways, Spawn attacks him and disables his cannon arm. The Curse retaliates and once again knocks Spawn out. When The Curse turns his back on him, the Spawn once again returns to life and incapacitates The Curse.

Spawn resurrects a bum killed in the local gang wars, weakening himself with the power drain. At that moment, he's attacked by The Curse, a religious fanatic convinced that he'll gain entrance to Heaven by killing demons. After regaining his strength, Spawn evens the score by attacking The Curse as he preaches.

Retrieved from "https://imagecomics.fandom.com/wiki/Spawn_Vol_1_27?oldid=68277"
Community content is available under CC-BY-SA unless otherwise noted.