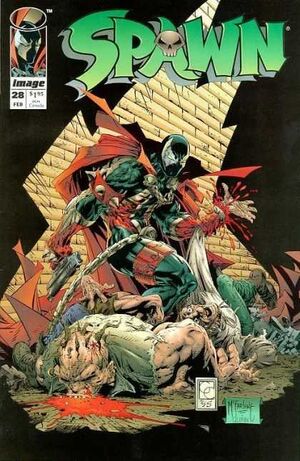 I'm KING here! This is my home. How dare you come here and try and turn my people against me?!

Spawn is still infuriated and bolts The Curse (Phillip Krahn) to the brick wall in a Jesus Christ pose with his arms extended. The Curse continues his fanatical rant and claims he will be saved by Heaven. Spawn yells at him that he has contol of this area and that he's insane. He takes off to tell him that he will return.

Wanda Blake arrives in Manhattan, New York. As she gets out on foot, she is followed by several street thugs. When she pays off a bum to take her to Spawn, she finds The Curse tied to the wall. She freaks out and runs away but runs into her pursuer's arms. Spawn appears and brutally murders the men in anger. When he finishes, he discovers it was Wanda and they share a moment. When he tries to touch her, she freaks out and runs away. She leaves him with a picture of her family stating that he didn't just save a life, he saved a family. Spawn spent the next five hours staring at it.

Sam Burke thumbs through the files that Spawn handed him on Chief Banks.[1]

Elsewhere, Terry Fitzgerald patiently takes care of Cyan Fitzgerald and decides to give a call to Wanda's friend. When Wanda's friend claims she hasn't seen her, Terry begins to worry about his wife as she lied to him and told him she was heading to her friend's house.

As the defeated Curse hangs from the walls of Spawn's alley, Wanda scours the alleys in search of Spawn. She has come to find out why Spawn saved Terry from certain death. When Spawn saves her from a group of thugs, she mutters some quick words of thanks, but can't overcome her fear of him and quickly flees.

Retrieved from "https://imagecomics.fandom.com/wiki/Spawn_Vol_1_28?oldid=59702"
Community content is available under CC-BY-SA unless otherwise noted.