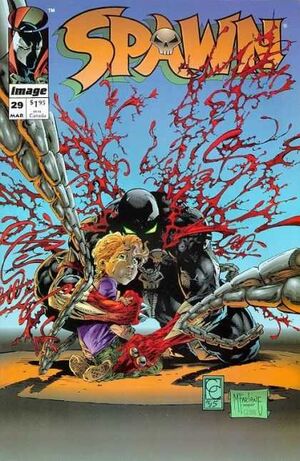 Spawn falls from the sky into Andy Frank's path in Alabama. As Spawn passes out from his battle in Heaven,[1] Andy puts him in his wheelbarrow to take him home. At first Spawn's body won't budge. Spawn's suit helps Andy life him up as he weighs 400 pounds made of pure Psychoplasm. As Spawn fades in and out of consciousness, he spots lacerations and bruises on Andy's back.

In Queens, New York, Wanda Blake tells Terry Fitzgerald that she was terrified when meeting Spawn but she can't stop thinking about him.[2]

In a small home in Alabama, Police Officer Joe Frank beats his son, Andy, for not having food ready for him. His younger brother Eddie tries to stick up for him, but Joe starts beating Andy even harder.

Later that night, Andy puts on a hard face for Eddie and tells him it didn't hurt too bad. He takes Eddie out back to the shed where he hid Spawn's body. Spawn is still weak from his fight in Heaven and passes out again.

At New York City Police Headquarters, Sam Burke reads through the file on Chief Banks and is shocked to read that he was responsible for hiring Billy Kincaid to kill the senator's daughter.[3] When Chief Banks yells at Sam, Sam arrogantly and defiantly walks away and smiles. He keeps the file instead of turning it in like Spawn had requested.

On Sunday morning, Joe plays the part of a perfect gentleman as he takes his kids to church. However, he snaps when Andy drops his last beer and strikes him again. When Spawn walks in and sees the boys were terrified, he hugs them and tells them he will take care of them.

At the same time in Queens, Wanda tells Terry that she didn't think there was anything human about Spawn when she met him.

Spawn track Joe to a bar where he had been drinking. He pulls him into an alley and covers his body with tattoos that say he beats his children. Spawn leaves him and tells him things will be much worse if he has to come back.

Later that night, Joe begins to take out his anger on Andy again. Eddie finds Joe's police gun, and shoots him in the head to end their nightmare.

In a small Alabama town, a well-respected police officer abuses his two young boys. The youngest, Andy, gives shelter to the battered Spawn. Spawn takes action, brandishing the father with the words "I beat my kids." This only increases the violence, which pushes the older boy to grab his father's pistol and end the abuse forever.

Retrieved from "https://imagecomics.fandom.com/wiki/Spawn_Vol_1_29?oldid=68157"
Community content is available under CC-BY-SA unless otherwise noted.