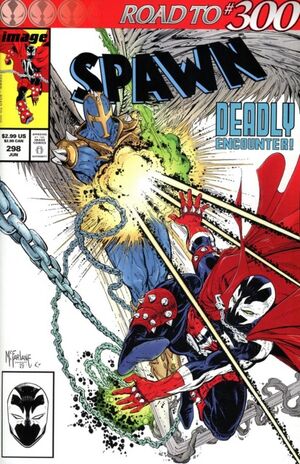 TWO ISSUES ‘TIL SPAWN #300! Spawn vs. the full might of Heaven’s newest Godsend—ROUND 1! TODD McFARLANE and JASON SHAWN ALEXANDER up the ante in this lead-up to SPAWN’s record-setting 300th issue, featuring TODD McFARLANE’s special parody recreation of one of his own classic comic book covers!

This cover is an homage to Amazing Spider-Man #298, which was also drawn by Todd McFarlane.

Retrieved from "https://imagecomics.fandom.com/wiki/Spawn_Vol_1_298?oldid=67384"
Community content is available under CC-BY-SA unless otherwise noted.