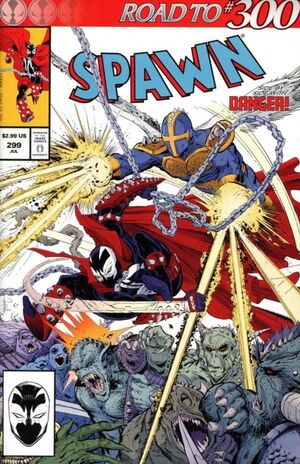 LAST ISSUE BEFORE SPAWN 300! Witness the debut of TODD McFARLANE’s newest creation—The Rapture! Heaven’s answer to the mythic Four Horsemen of the Apocalypse, these eternal warriors are tasked with eliminating the plague called humanity from the face of the Earth. The WAR TO 300 rages! Next month, new allegiances will form, new enemies will rise, and history will be made! HOLLYWOOD NEWS! Soon to be a major motion picture from Blumhouse Productions, directed by Todd McFarlane, and starring Jamie Foxx as Spawn and Jeremy Renner as Twitch.

This cover is an homage to Amazing Spider-Man #299, which was also drawn by Todd McFarlane.

Retrieved from "https://imagecomics.fandom.com/wiki/Spawn_Vol_1_299?oldid=67385"
Community content is available under CC-BY-SA unless otherwise noted.