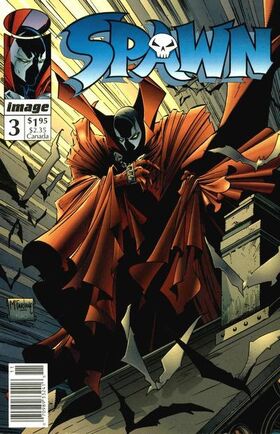 What's the matter? It looks like you've seen a ghost.

Spawn suddenly recalls his ex-wife's name is Wanda Blake. He decides to head to Central Intelligence Agency Headquarters to dig up Wanda's file to find her. He thinks about how he used to think it's an invasion of privacy but now he just wants his old life back. His memories are slowly returning to him and he knows the devil is playing with him. He knows there are many unanswered questions he needs to solve like who the clown was he met in the alley.[1]

Elsewhere, Malebolgia laughs as he watches from his throne. He continues his plot to expand his army and use Spawn to aid in gathering the requisite soldiers. He's glad he has sent several other followers to check in on him as no one from Hell truly trusts each other.

Sam Burke and Twitch Williams pour over the casework they have pilling up with the mob heart surgeon killings. Outside, Violator prowls the alleys singing songs to himself about murder.

At the Central Intelligence Agency Headquarters, Spawn breaks in to find Billy Miller sexually harassing his secretary Linda who is already married. Spawn picks him up by the throat and warns him to keep it in his pants. He then takes the file on Wanda Blake and retreats into the night.

Malebolgia laughs as Spawn uses violence which he loves and yearns for.

On the rooftops, Spawn reads she had started a fund in his name and maps the information to her current location.

Outside of Wanda's house, Spawn uses his Necroplasm energy to transform into a Caucasian once more. He rings the doorbell and is beside himself with how beautiful she is. When a small child named Cyan comes to the door, he faints.

Upon waking up, he finds Wanda has married Terry Fitzgerald, and together they had Cyan. He is belittled as he could not have children with Wanda and now understands the devil is playing with him showing him that his wife has moved on, remarried, and had children. Spawn leaves wishing her happiness.

In a nearby alley, Spawn's spell wears off and he returns to his vigilante costume. The clown walks up and threatens him again. This time he transforms in his true form of the Violator in front of him. Slightly surprised, Violator takes advantage of Spawn's distraction and quickly plunges his hand into his chest ripping out his heart. Spawn collapses on the ground dead.

Violator hears, "who said anything about being human" from behind him and turns around to see Spawn rejuvenated with green Necroplasm healing his heart wound.