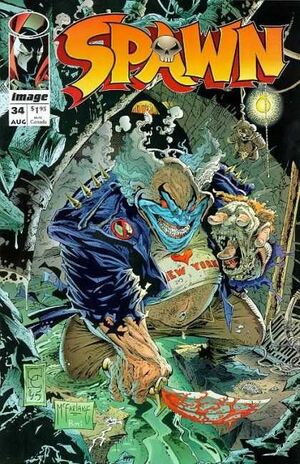 Your solution to all this? Kill what you don't understand, let your ignorance rule those government-trained homicidal instincts.

The Violator is pulled from the water by an unseen bystander. Violator curses himself and still can't believe that Spawn's suit has already started morphing. He thinks about all the hatred he's built up over training Hellspawn over the years and how he should be the rightful leader of Malebolgia's army and not Spawn.

In Queens, New York, Wanda Blake arrives at Granny Blake's house with Cyan Fitzgerald. Wanda tells her she's starting a fundraiser and that Terry Fitzgerald has started a new job.

In Hell, Malebolgia watches Spawn's actions through a blood pool and is excited to see him fulfilling the prophecy. He expects his Armageddon war to come soon.

At Central Intelligence Agency Headquarters, the Violator surprises Jason Wynn and approaches him. While apprehensive, Wynn listens as the Violator tells him he has dirt on him. He tells him he wants him to get close with Terry Fitzgerald. He thinks it will drive Spawn nuts and drive him out into the open. The Violator sets up some deals and the president personally calls Jason to thank him for solving the issues in Bosnia being reported by the news.

At the hospital, Sam Burke is beside himself when Twitch Williams is visited by his bombshell wife, Helen Williams. She tells him to get better and she has to pick up Trudy after school. After leaving, Sam fills Twitch in that he has received some phone records of Chief Banks. He found out he's making late night calls to the Central Intelligence Agency but isn't sure why or to whom he calls.

In the Bowery Alleyways, Cogliostro scolds Spawn for impetuously attacking Stinky. He tells him it's exactly what Malebolgia wants and he needs to think before acting. He tells him Tyrone has been running the drug trade in his streets and was only getting a higher quality sample since his sales were slipping. He also tells him Tyrone has been in and out of detention and been involved in two murders but got away scott free for being only seven years old.

Jason Wynn approaches Terry as he was secretly looking into Jason Wynn's past and why he wanted to go after him. He covers it up and is surprised when Wynn tells him he's been promoted to aid in developing cyber security due to some recent threats against Wynn's organization.

As Spawn and the Violator battle in the sewers, a water main ruptures and washes them away. Violator, worried by Spawn's rapidly developing armor, enlists Wynn to help him destroy Spawn. He advises Wynn to befriend Terry while leaning on his family, hoping to enrage Spawn and make him vulnerable. Cog urges Spawn to think before he acts, lest he be goaded into a foolhardy attack.

Retrieved from "https://imagecomics.fandom.com/wiki/Spawn_Vol_1_34?oldid=59704"
Community content is available under CC-BY-SA unless otherwise noted.