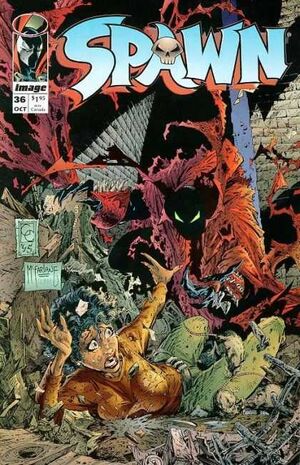 Uh?! Not dead yet? Good! I didn't want your pain to end too quickly!

Plot Synopsis for "Set Up, Part 2"

Jason Wynn orders for his troops to take out Spawn. Terry Fitzgerald refuses and Wynn relieves him on the spot. Spawn leaps through the window carrying Wynn with him. As they land, a security guard bursts in. Wynn takes the guys gun and kills him. Moments later, Wynn comes screaming into the building that Spawn has killed on his guards, secretly framing him.

Several more units and helicopters arrive chasing Spawn as he attempts to escape with his life. They let several missiles fly blowing up the building that Spawn was in. They copters head home wishing each other a good mission home.

At New York City Police Headquarters, Sam Burke and Twitch Williams are infuriated that Chief Banks has already been cleared of charges. They talk about how it's a corrupt system and someone high up must have Banks's back. Banks suddenly bursts into the room and threatens to fire both of them when the heat dies down. Uncharacteristically, Twitch snaps back and tells him if anything happens to them or their families a backup copy of the files will hit every major news avenue.

In Queens, New York, Wanda Blake and Cyan Fitzgerald hug Granny Blake goodbye after spending an afternoon with her. They talk about how Terry is working late and turn on the news to learn about the bombings where Terry is working.

As Jason Wynn recovers in a hospital, he's pressured by the government. After he falls asleep, he's awakened by the Violator in Clown form. He tells him he's doing a good job of pushing Spawn's buttons per his request,[1] but don't push too hard.

Later that night at Wanda's home, Spawn stops in scaring her half-to-death. He tells her he is truly Al and she doesn't want to believe it. Spawn runs away to the sewers.

Spawn is pained to see his old friend Terry protecting Wynn. Wynn's troops fire on Spawn, forcing him to flee with his prey. Pursued by aerial airships, Spawn finally leaves Wynn behind to escape. Now suspicious of Terry, he warns Wanda about him. The visit leaves Spawn shaken by the abject terror he engenders in Wanda.

Retrieved from "https://imagecomics.fandom.com/wiki/Spawn_Vol_1_36?oldid=59706"
Community content is available under CC-BY-SA unless otherwise noted.