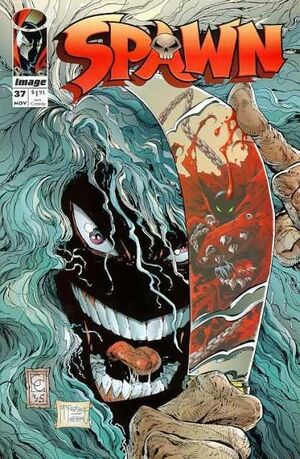 Thank you. I can't say what it means to find a brother in this gorgeous, purgatory of cigar butts and dead dogs!

Appearing in "The Freak"

Plot Synopsis for "The Freak"

In the sewers, Spawn is awoken by a gang of thugs and saves himself and the nearby The Freak. They introduce themselves to each other. The Freak tells him his family was murdered by a man named Doctor Delirium. When he sought revenge, he was disabled by his guards. He was subjected to experiments that should drive most men to become a human vegetable. He was resilient and escaped, becoming an enhanced fighter that he is today.

Spawn agrees to help The Freak. The Freak escorts him to his underground lair. From there he shows Spawn a pathway to their enemies. He tells him there are defenses beyond his imagination, and that's how he had killed his parents. Spawn is confused as he says he thought he had said wife and kid earlier. The Freak reminds him he had said "his family" was killed.

They enter Delirium's lair, and they are attacked by several medical professional dressed thugs. They make their way to Delirium and The Freak throws him out on the street below. They fight their way through newly arrived police officers to escape.

Mean while at Federal Health Service Department, Mrs. Kulbiczi is called in and told that her husband has escaped from the insane asylum again. She asks why haven't they called his doctor, Dr. Delorean. They claim they have but he hasn't responded.

In the sewers, as Spawn and The Freak walk away, The Freak claims the insane act is just a schtick. Spawn wants to know what the hell they just did and as he walks in front of The Freak, he secretly pulls a gun and points it at Spawn as he walks ahead.

Spawn saves the Freak, a strange new alley creature, from a gang of thugs. The Freak tells him how his family was killed and his mind altered by Dr. Delirium, a crazed scientist. Now revenge is his sole purpose for living. With Spawn's help, the Freak invades Delirium's lair and kills him -- but is this freakish figure everything he claims?

Retrieved from "https://imagecomics.fandom.com/wiki/Spawn_Vol_1_37?oldid=44116"
Community content is available under CC-BY-SA unless otherwise noted.