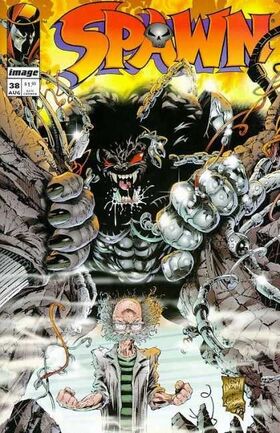 I was to unite the cybernetics with the gorilla, which was code-named Cy-Gor.

In a remote mansion, Chris breaks into a house. He finds tapes labeled Anna and can't believe the filth in the house. Chris watches a video from the ailing health victim, Dr. Frederick Willheim. The Doctor tells the camera about how he worked as a front-line medic for physician training when war broke out in Europe. He talks about how he met a woman who would change his life forever, Anna Willheim, in his fourth year of service. Soon, she began suffering from an unknown neurological disorder and went through several miscarriages. As a neurologist specialist, he stopped at nothing in experimenting to save her life.

Later learning of his research, the U.S. Army invited him to visit their cybernetic simian project. When Anna passed away, Willheim began research to transfer human brain patters into an ape with an 80/20 distribution. He felt this was the only way to bring his Anna back to life. He then talks about when Cy-Gor moved on its own free will and without cybernetic enhancements, he knew it was time to experiment on Anna.

Chris busts into another room to discover the Doctor's body has been transfered to a brain in a jar while his body decays. Chris freaks out and begins to run away. The doctor claims on the tape that "it" will be so hungry. Chris can't imagine what but as he runs away runs into Cy-Gor

Elsewhere, Spawn recovers his guns and hardware he stole.[1] Cogliostro rebukes him telling him he has no clue who his true enemy is. Spawn tells him that The Freak has showed him how to deal with his maker. He tells him after Wynn comes Fitzgerald for taking his wife and siding with Wynn. Cog asks Spawn if he's ever considered why they placed him in the Government's Elite Force.

Spawn stops in at Granny Blake's home. She welcomes him in. She tells him that Wanda was scared that she met a demon the other day.

Chris wanders through Dr. Frederick Wilhelm’s mansion looking for files on the uncompleted Cy-Gor project. While viewing Dr. Wilhelm’s last recorded message, Chris learns that Frederick’s devotion was not solely to the simian project as he has become obsessed with bringing his wife back to life. After surviving a stroke Dr. Wilhelm finds himself physically incapable of taking care of Cy-Gor. Chris attempts to leave the mansion but Cy-Gor fins him first. Meanwhile Spawn prepares the weapons he stole from the army base for a one-man war against Wynn. Cogliostro warns Spawn that killing Wynn is useless since he represents only a small piece of the puzzle. Once again Spawn visits Granny Blake.