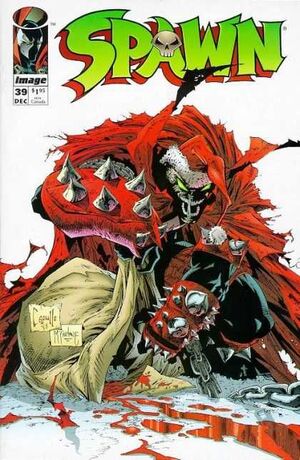 It’s Christmas Eve in Harlem. A family sits around the table: Greg the naive son, Nadine the rebellious daughter, and Phyllis the mother. Phyllis works two jobs waitressing and cleaning toilets. Phyllis instructs her kids to go to bed. She then heads into work and her boss, Mrs. White, scolds her for being late.

At home, her kids watch Christmas movies until Nadine decides to take off to see a boy. As Greggy falls asleep and midnight strikes, he thinks he hears Santa on the roof, with his sleigh bells jingling.

On the roof, Spawn chases several robbers, his chains clang together like sleigh bells. He jumps off from the building after the men with his K7-Leetha suit using its chains to grab the men. As Greggy looks out the window, he spots Spawn jumping after them with the men in chains looking like reindeer carrying Santa across the sky.

Greggy runs to the tree to see if Santa left presents. When he sees none, he runs back to the window and flings it open. He yells out that he was forgotten but then he spots money on the ground dropped by the robbers. He thinks it's a present and yells thank you to Santa in the night sky. Greggy runs back to wrap the money and hide it under the tree for his mom and sister.

The next morning, Phyllis is shocked to discover the money. She decides to share it with the entire building as a part of her Christmas cheer. Phyllis tells Greggy that Christmas is a time of love and cheer. He should always share it with friends and family.

Elsewhere, Spawn sits in his throne in the Bowery Alleyways. He stares at the photo Wanda gave him of her and her family.

Retrieved from "https://imagecomics.fandom.com/wiki/Spawn_Vol_1_39?oldid=67497"
Community content is available under CC-BY-SA unless otherwise noted.