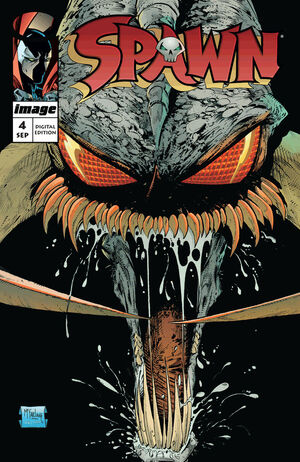 Please, honey, tell me. I don't expect you to just forget him

Violator and Spawn engage in a brutal showdown with both loosing appendages. Violator is surprised Spawn is more powerful and claims he was supposed to be the stronger one. Malebolgia intervenes, explaining to them that they are both his minions in his battle against Heaven. Their goal is to cause man to do wrong, and Spawn will stop and kill them while doing so locking them on Malebolgia's side. He claims that heaven is strong but they won't be able to create the numbers he can.

Malebolgia restores Spawn's lost arm and shows pity on him. He then punishes Violator for his unscheduled killing spree because it has influenced crime lords to slow down their evil ways. he locks him in his clown form for a temporary time period.

At the Fitzgerald household, Wanda Blake wakes up with a nightmare that Al was reaching out to her for help but had changed somehow. Terry Fitzgerald lovingly supports her and feels she doesn't have to hide that she can't forget about Al.

Retrieved from "https://imagecomics.fandom.com/wiki/Spawn_Vol_1_4?oldid=65643"
Community content is available under CC-BY-SA unless otherwise noted.