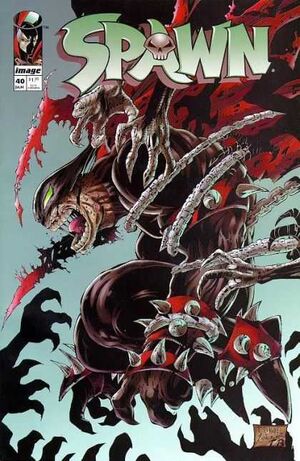 And know that you're awake, I sincerely hope you'll be able to feel the grand finale! The searing pain as I remove your LIVING BRAIN!

Spawn returns home to Rat City, drunk. When he spots several bums tinkering with his chair, he yells at them and tells them never to return. As Spawn sits down, his suit warns him. However, it is too late as an electric shock knocks Spawn out. The bums undress from their garb and reveal that they are technological minions. They grab Spawn with forklift and prepare him for shipment to West Virginia.

Elsewhere, Terry Fitzgerald calls Wanda Blake on the phone. They talk about how it's strange that Spawn showed up at the office the other day, and then tried to warn Wanda and tell them it was really Al Simmons.[1]

In a remote village, locals heard stories of big foot on lose. At the same time, a small boy is out fishing. The locals find a cow, completely eviscerated and leaving no tracks in the snow after the attacker leaving. They can't understand what would cause such a scene. The dogs pick up a scent and the hunting part lets loose a salvo of gun shots. Despite being easily stronger, Cy-Gor run the opposite direction. A police vehicle is responding to the commotion and is about to his a small boy fishing when Cy-Gor jumps in the vehicles path and smashes it to bits saving the boy.

Spawn wakes up to The Curse dissecting him in his West Virginia castle.

When Spawn sits on his booby-trapped throne, electrically-charged tentacles bind him to the seat and send him reeling into darkness.When he awakens, his costume is gone and the Curse is preparing to dissect him! Meanwhile, the hungry Cy-Gor has escaped from Dr. Willheim's lab.

Retrieved from "https://imagecomics.fandom.com/wiki/Spawn_Vol_1_40?oldid=67498"
Community content is available under CC-BY-SA unless otherwise noted.