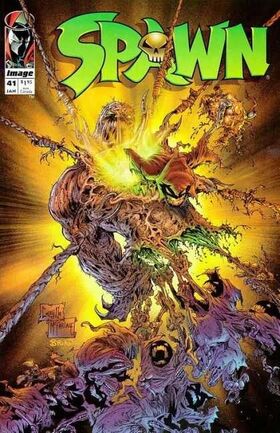 How does it feel, Hellspawn? To be helpless with no limbs. Waiting for the next wave of pain to pour over you.

At the Curse's Castle in West Virginia, The Curse leaves Spawn tied down to a gurnee to pick up more supplies. The Curse promises to return and finish dissecting him to understand where evil comes from. After the Curse leaves, Spawn inches a scalpel knife closer, and then amputates his hand. He telepathically causes his dismembered hand to scurry over to the case where K7-Leetha is locked up. The hand smashes a hairline fracture in the casing, which is enough for K7 to finish the job. It breaks out of the glass. At the same time, the Curse returns and attacks. The Curse sets off a self-destruct button and the suit gathers Spawn and jettisons itself out at the last second before the castle explodes.

Elsewhere in the woods, Cy-Gor attacks two lovers who are becoming intimate, thinking the woman was being raped.

In New York City, The Violator warns Jason Wynn to get on with threatening those people closest to Spawn.

As Cy-Gor rampages, the Curse prepares to get to the root of Spawn's evil by studying his body. Left alone, Spawn severs his own hand and uses it to crack the tank holding his uniform. The uniform escapes and goes berserk as it re-integrates its host while attacking the Curse, leading him to blow up the entire complex.