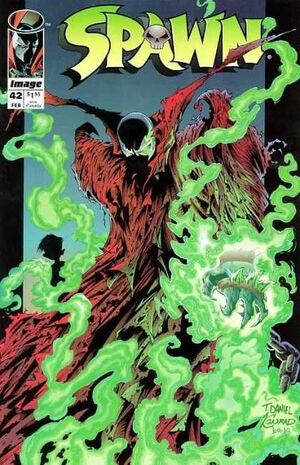 Let's be glad for the little things.

Sam Burke and Twitch Williams head out to Connecticut to look deeper into connecting Chief Banks with Billy Kincaid.

Pat, a local schoolboy, runs home with a duffel bag full of comics. He runs from the local school bullies who plan to steal his comics. He stumbles into Spawn who is hiding in a shed, healing himself.[1] Spawn offers him advice on standing up to his enemies and women.

In Queens, New York, Wanda Blake comes home to Granny Blake. They discuss the string of good events such as the anonymous donations and pension raises. Wanda coughs and says it's probably just the stress.

In New York City Police Headquarters, Sam and Twitch break into Chief Banks office. They see the courier service bills and feel it will be a good lead to investigate so they take them.

As Pat walks home, he's attacked by Tommy and his gang. He rips off his shirt to reveal his Terrorizer outfit. However, Spawn shows up and picks up the gang. Pat yells at Spawn to put the kids down and that this was his fight. The boys run away in terror.

The next day, Pam Williams approaches Pat and tells him she's impressed how he stood up to Spawn as she gives him the "doe" eyes.

Nine-year-old Pat Shaunessy, a comic geek, ducks into his hideout to escape the school bullies. Suddenly, Spawn's crazed uniform attacks him, but Spawn befriends Pat. Later, the uniform lashes out at Pat's tormentors, and only Pat's intervention saves their lives. Meanwhile, Cy-Gor makes his way to New York and Sam and Twitch tighten the screws on Chief Banks.

Retrieved from "https://imagecomics.fandom.com/wiki/Spawn_Vol_1_42?oldid=59708"
Community content is available under CC-BY-SA unless otherwise noted.