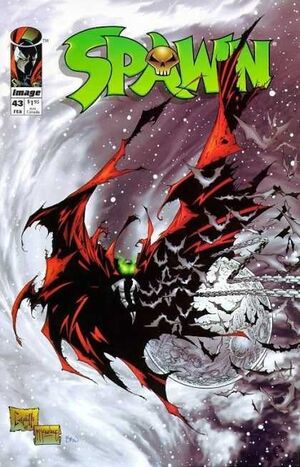 Sam Burke runs late for work again. Twitch Williams picks him up and informs him he traced the courier deliveries to the heads of major agencies. This helps explain why the case against Chief Banks was dropped so quickly.[1] When they arrive at work, Chief Banks tells them they are fired and kicks them out.

Sam and Twitch take the files to their news contact, Mr. Taylor.

Spawn remembers how he surprised Wanda Blake for her birthday with Shanna. He rests through night when he emerges with the rest of the nocturnal creatures. He begins feeding on their energy.

Mr. Salicrop, the editor, calls some contacts. The information reaches Jason Wynn. Wynn has his sources allow the leak on Banks but have them cut out all information about Wynn's involvement. They blame all of it on Banks.

The news hits the stands and Banks locks himself in his office. When Internal Affairs show up to question him at his office, Banks take his life with his own pistol.

Retrieved from "https://imagecomics.fandom.com/wiki/Spawn_Vol_1_43?oldid=59933"
Community content is available under CC-BY-SA unless otherwise noted.