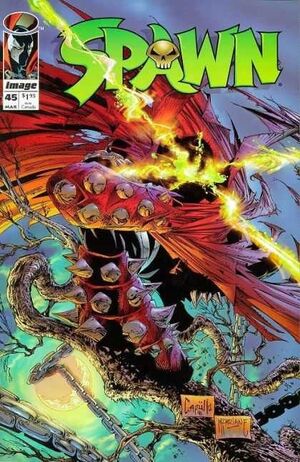 I always vowed I wouldn't keep any secrets from her. The silly thing is, she's probably understand completely.

Tiffany is momentarily tricked into thinking she successfully decapitated Spawn. He reveals he pulled his head into his cape and counterattacks. He uses Necroplasm to heal the hole she shot in his chest. Spawn uses The Black Dispersal to summon the dark creatures of the night and marks Tiffany. The young angel is alive by wolves, bears, and snakes.

Sam Burke and Twitch Williams run out of leads on finding Spawn. He's the missing piece to understand why only Louis Banks took the fall. Twitch says he still hasn't told his wife yet as it would break her heart. Sam reveals he has a bunch of saved money and will float them until they crack the case. He tells Twitch he's always dreamed of starting a private investigation agency. Twitch hugs him in excitement.

Wanda Blake sees the doctor for her cough. She learns she has strep throat. Doctor Buscino says she should be fine, though she begins worrying about giving it to Terry Fitzgerald who has been working really hard.

Spawn returns to Rat City. Cogliostro warns him he needs to train his costume. It's morphing to fast and he must teach it that he is the master, or else it will take over.

Tiffany lops off Spawn's head, only to see it turn into a mass of maggots in her hand - she's been tricked! Spawn attacks, while the evil creatures in the woods gather to aid him. Together, they reduce the angel to bloody scraps. Spawn returns to New York and meets Cog, who warns Spawn that he must gain control of his costume. Meanwhile, Sam shares with Twitch his dream of opening his own detective agency.

Retrieved from "https://imagecomics.fandom.com/wiki/Spawn_Vol_1_45?oldid=68133"
Community content is available under CC-BY-SA unless otherwise noted.