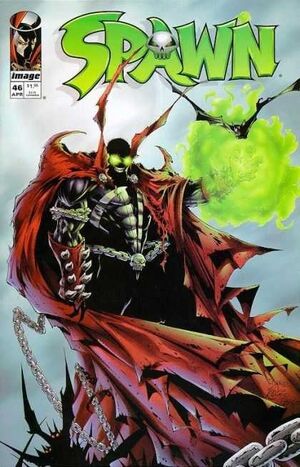 Now they know I'm watching... and someone always panics.

Johnny Torrenzo is pulled from his wife and kid by Antonio Twistelli's men. Upon getting in the limo, he's shot in the head and kicked out the door. At his office, Twistelli smiles that he taken out someone stealing from him. He suddenly gets a call from Luciano Bartino, demanding the return of their property, Overtkill. Twistelli worries as his boss Bartino is dangerous.

In New York City, Spawn absorbs evil from the rats and worms; creatures who don't touch the light. He needs to replenish his strength from what The Curse did to him.[1]

In Queens, New York, Terry Fitzgerald comes home sick from strep throat. Wanda Blake tells him the permits came in and they will begin building at the children's hospital next week.

Throughout the city, someone kills many of Twistelli's thugs. Their heads are sent to Twistelli in the mail infuriating him. In retaliation, he orders a hit on Spawn.

Cogliostro tells Spawn that Tiffany isn't dead unless he absorbed her light. He informs him that Angels are made of plasm, the same way Hellspawn are and he needs to learn how to take them out. He thinks Spawn keeps acting on instinct and that will play right into the devil's hands.

Elsewhere, Tremor appears out of a toilet and threatens Vinnie Bolbani to give up Tony Twist's location. Shortly after, Tremor confront Tony and threatens revenge on him for killing his family and turning him into a monster. Twist tells him he had kept his brother, David, alive and if he's hurt, David dies.

Tremor heads to New York to ask Spawn to partner up in taking Tony down.

Retrieved from "https://imagecomics.fandom.com/wiki/Spawn_Vol_1_46?oldid=68326"
Community content is available under CC-BY-SA unless otherwise noted.