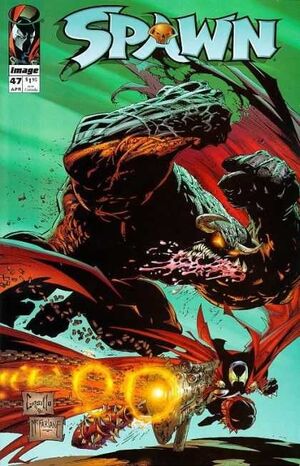 And if you're thinking about screwing with me, even a little, stop and consider this. You took my family from me. I'll do the same for you.

Tremor brings Billy Scambino to Spawn per his request. Billy tells him he was tailing Terry Fitzgerald when Tony Twist thought he was Spawn. He was told to keep following him since he thought they might still be connected. Spawn agrees to help Tremor attack Twist and rescue his brother. Tremor throws Billy into the dumpster so they can prepare their raid. Cogliostro walks up later and is worried about Spawn losing control of his suit.

Elsewhere, Jason Wynn explains he is setting up the dominoes to take down Spawn's support system. Violator says he excited and wants to regain his spot in hell when Armageddon happens. He plans to manipulate Wynn to prove to Malebolgia he belongs in hell by using brains.

Twistelli sits in his office awaiting Tremor's arrival. As predicted tremor arrive and is surprised to see his brother David Massullo working for Twistelli. David tells him his team brother is dead and the Mafia saved him. Spawn breaks into the room and breaks David's arm and leg. Tremor is about to attack Spawn in retaliation when Spawn tells him they need to take him to a hospital or he'll die. Spawn reasserts life is by his rules now. He warms Twistelli to stay away from Wanda Blake or he'll release information to his Sicilian brothers that he doesn't want out.

Retrieved from "https://imagecomics.fandom.com/wiki/Spawn_Vol_1_47?oldid=68330"
Community content is available under CC-BY-SA unless otherwise noted.