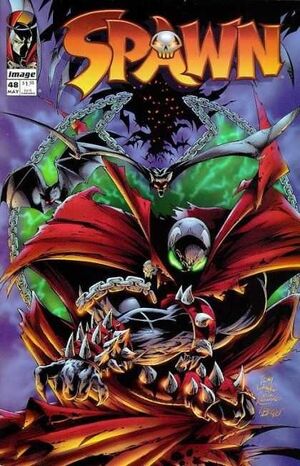 I was amazed when you said you found a quiet spot for us. Seeing as no one else is renting on this floor, I'll credit out good fortune to your unique standards.

Appearing in "The System"

Plot Synopsis for "The System"

Sam Burke and Twitch Williams check out their new, overpriced office. A letter is suddenly slipped under the door. Inside the letter they find more blackmail pictures on Chief Banks's inner circle. They wonder who could have left it as they performed a floor sweep and had found no one. They check out the information in the envelop and find that it is accurate.

Dissension continues in Rat Alley as to whether Al is good for them. Cogliostro approaches Spawn, who is building a fort wall to keep the bad guys from following him. Spawn lashes out and orders Cog to tell him everything or to get lost. Spawn pulls Bobby aside and tells him he has to go away for a while. He tells him in reality, he will still be nearby but no one else needs to know. He tells Bobby, that only he will truly know that he is nearby while everyone else will think he has left for their protection.

Meanwhile at the CIA building, Terry Fitzgerald uncovers the evidence he needs on Jason Wynn. Wynn walks in and almost catches him. Terry has his secretary, Julia, file papers away as he starts to not feel good with blurred vision.

Jason Wynn takes a phone call with someone helping setup the demise of two targets. The Violator sits across from him and smiles.

Retrieved from "https://imagecomics.fandom.com/wiki/Spawn_Vol_1_48?oldid=68136"
Community content is available under CC-BY-SA unless otherwise noted.