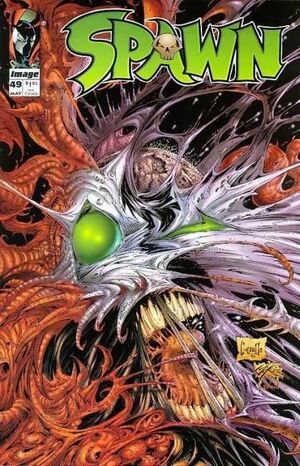 Come on, boy. Capture it. Control it. Harness its power. You must if any of us are going to live through this, you have to learn how to cage the demons.

Spawn heads to Queens, New York to see Granny Blake. Al confides in Granny Blake is fear for her safety if he continues to visit her but, his concern is met with a light sermon.

In the Bowery Alleyways, Cogliostro finds the personal prison Spawn has built. He breaks in and finds Al being attacked by his Suit. He frees Al from the suit and they escape the make-shift prison. As they relax, Cogliostro tells him he used to be a Hellspawn as well. Spawn breaks down and finally admits he needs help from Cog.

Due to his vision issues,[1] Terry Fitzgerald meets with a doctor. However, the doctor finds nothing wrong with him. Dr. Buscino decides to send him to a neuroscientist to make sure his brain is functioning properly.

Elsewhere, the Violator cracks up that Spawn is killing himself.

At the hospital, Dr. Rollins informs Terry he has a tumor in his brain. Preoccupied with the test results and Wanda’s murder conspiracy against him, he blacks out on his drive home. He is involved in a serious accident and ends up in the hospital. Wanda receives a phone call about Terry’s accident and rushes to the hospital.

Elsewhere, Sam Burke tells Twitch Williams he has a surprise as he jingles keys in front of him. On the edge since the mysterious file was slipped under the door, and feeling the financial pressure of starting their new business, Twitch pulls his gun when the car blows a rod. Sam calms the apologetic Twitch down and announces he has a surprise for him.

Retrieved from "https://imagecomics.fandom.com/wiki/Spawn_Vol_1_49?oldid=68140"
Community content is available under CC-BY-SA unless otherwise noted.