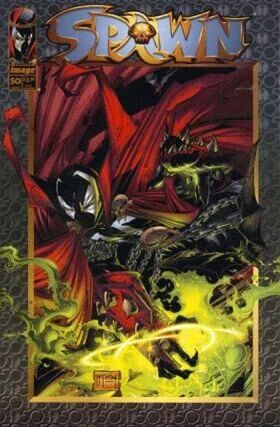 Holy herpe! He's gone! And he did it to himself... the doofus!

Cogliostro explains to Spawn that if he uses his power any more, it could result in him being transported back to Hell because the suit will want to return home. Cog tells Spawn he needs to let the anger inside him die, as that is what is causing his suit to morph prematurely in its lifespawn.

Spawn heads to the hospital where Terry Fitzgerald is being treated. He thinks about not helping Terry since he never did anything but betray him by working for Jason Wynn and marry his wife.

The Doctor informs Terry his tumor is malignant and he only has a few months to live.

In Queens, New York, Spawn visits Granny Blake. She tells him that Terry is dying and to send a prayer his way. Spawn recalls how he promised to always protect Wanda. He heads to the hospital, and against Cog's warnings, uses his Magic to heal Terry. He's instantly transferred to Hell for using his power.

The Violator is elated that Spawn is gone, but realizes he didn't get rid of him personally. He believes Malebolgia won't promote him unless he proves himself.