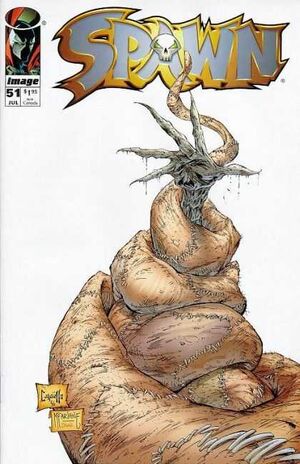 If we're going to be a legitmate detective agency then we ought to look the part... I call it The Crimemobile.

Spawn passes into 4th dimension of Hell. He's pressed to consider that he actually likes killing. A demon rips out his last human part, his heart. Malebolgia laughs as he sees Spawn enter his second incarnation. He knows that Spawn has come one step closer to serving in his army.

In Queens, New York, Terry Fitzgerald becomes fed up with medical examinations on his miraculous recovery and walks out.[1] When he arrives home, Cyan Fitzgerald shows him a necklace that she made with Spawn's shoelace that she found while at the hospital.[1] When Terry attempts to take dirty shoelace away from her, Cyan immediately protects it and keeps it close to her. Terry decides to let her keep it.

At Sam and Twitch's Private Investigators Office, Twitch Williams tells Sam Burke that their informant had to be high up, and wanted to target other high profile cases. When Twitch looks out back and sees a car parked out back, Sam surprises him telling him he used part of his savings to buy them a new vehicle. A '55 Chevy that he calls the Crimemobile!

Retrieved from "https://imagecomics.fandom.com/wiki/Spawn_Vol_1_51?oldid=67500"
Community content is available under CC-BY-SA unless otherwise noted.