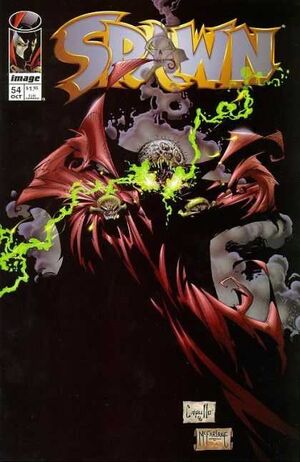 You're the only one skilled enough to attempt the mission. And, with your powers, the chance of survival increases dramatically.

Terry Fitzgerald follows his instincts to Rat City where he is cornered by bums wanting to mug him. Cogliostro intercedes. Cog learns that Terry is looking for Spawn.

Elsewhere, Sam Burke and Twitch Williams head to a meeting spot to meet with the informant who gave them information on Chief Banks.

In the alleys, Terry is led to Spawn's throne. He sees the scores of dead bodies from hookers and gangsters Spawn has killed over time. Enraged that he was brought to his sanctum, Spawn lifts Terry off the ground and demands to know if working for Jason Wynn. Spawn accuses Terry that he aided Wynn in killing him while he was mortal to take his wife. Terry denies the allegations but Spawn still blames Terry for protecting Wynn.[1]

Terry pleads that if he's still alive, he has to tell Wanda. Wanda had thought he was still dead. Terry tells Spawn he only wanted to get closer to Wynn to understand why he was setup to take the fall earlier.[2] Cogliostro points out Terry was placed in this mess because of the guns Spawn had stolen from Wynn's warehouse.[3] Spawn offers Terry a chance to prove it and requests he meet him at the office tomorrow night.

That next evening, Terry tells Wanda he's working late again and not to worry. He gets off the phone and is startled to run into Spawn in the shadows. Spawn hands him the papers showing guns are being lost in shipments and cases where shipping location don't match the payer. Terry says he needs the actual guns to prove Wynn has been sending guns to other countries and terrorists as payment. Terry then asks if Spawn had cured his cancer earlier.[4] When he realizes Spawn still cares about him, he hugs Spawn as he agrees to help him take Wynn down.

To confirm his dreams of Al, Terry searches the alleys for his dead friend. When Cog intercepts and questions Terry about his motives, he ends up mediating their encounter and saving Terry from Al's jealous rage. After Terry shows Al proof of the case he has against Wynn, Spawn helps Terry on a dangerous mission. Meanwhile, Sam & Twitch wait for the "informant" regarding information regarding information about the Chief Banks - Senator Jennings conspiracy.

Retrieved from "https://imagecomics.fandom.com/wiki/Spawn_Vol_1_54?oldid=44670"
Community content is available under CC-BY-SA unless otherwise noted.