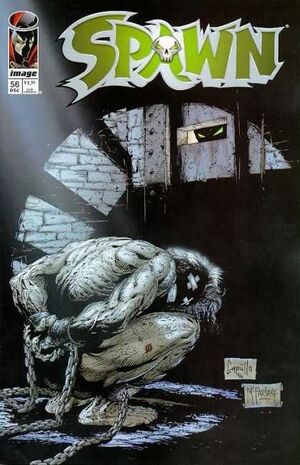 The President calls Jason Wynn. He informs him that the guerrilla attacks around the world are uncovering evidence of his involvement in illegal arms trading. The President orders Wynn to take control of the situation as he doesn't want any complications.

In a remote camp, Major Forsberg is held in his cell, slowly going insane. Suddenly the sound of gunfire can be heard in the distance from an attack on the prison. Terry Fitzgerald issues commands to Spawn to find Forsberg as he has vital intel on bringing Wynn down.

Meanwhile in the cell, Forsberg replays the scene where Wynn had killed his wife and child. Spawn bursts in and grabs Forsberg. Forsberg drops a box he was holding which had memories of his murdered family.

Meanwhile in Rat City, Cy-Gor finds Spawn's throne and sits in it while he's gone.

Retrieved from "https://imagecomics.fandom.com/wiki/Spawn_Vol_1_56?oldid=68159"
Community content is available under CC-BY-SA unless otherwise noted.