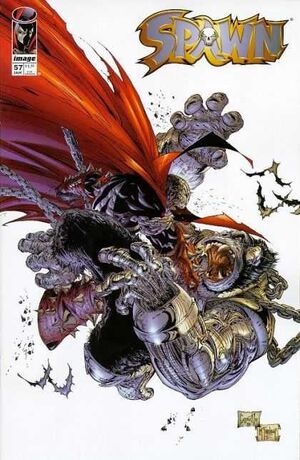 Appearing in "The Beast"

Plot Synopsis for "The Beast"

Spawn tells Terry Fitzgerald that he's successfully extracted Major Forsberg back to Rat City. Terry orders him to keep him alive and warm as he needs information from him on Jason Wynn. He suddenly jumps off the phone to hide his activities from Wanda Blake who just returned home.

Spawn hangs up the phone and looks at Forsberg. Suddenly the worms Spawn uses to regenerate burst out of the box and come towards him. He reacts too late and Cy-Gor bursts out from behind his throne and grabs him. After pulling in the creatures of darkness, worms and bats, Spawn unleashes them on Cy-Gor. They suffocate the beast and cause him to pass out. He mutters his own name, "Cy-Gor" and it triggers a reaction in Forsberg. Suddenly speaking coherently, Forsberg states he didn't think Wynn cared about that program.

Forsberg explains Wynn sent in an operative, he thinks named Simmons, to hack into data to create the ultimate killing machine. A man name Mike Konieczny was about to blow the whistle on Wynn but he was inducted into the Simian project and became Cy-Gor.

As Cy-Gor reboots, he thinks how he must destroy his creator who he believes to be Al Simmons.

In Queens, New York, Wanda Blake is furious at Terry having walked in on him with all of his spy equipment. She's furious he would have withheld information from her as she was helping him attempt to bring down Wynn. Wanda begins to have second thoughts with how powerful Wynn is. She's worried about Cyan.

Retrieved from "https://imagecomics.fandom.com/wiki/Spawn_Vol_1_57?oldid=45072"
Community content is available under CC-BY-SA unless otherwise noted.