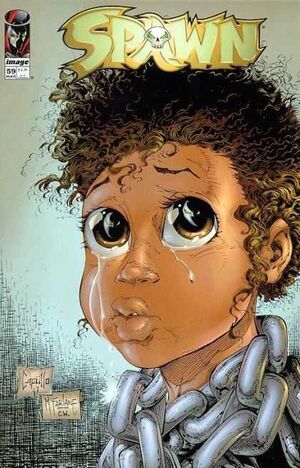 In Queens, New York, Spawn puts the pacifier back in Cyan Fitzgerald's mouth as she sleeps. He then surprises Terry Fitzgerald in his home. Spawn impatiently tells him he wants to move on Jason Wynn as things are taking too long.

Elsewhere, Wynn is given a disc showing his own employee, Fitzgerald, has been hacking him. He realizes the raids on his weapons cache and loss of Major Forsberg were probably caused by Fitzgerald.[1]

Meanwhile in Queens, Wanda Blake is playing with Cyan when she gets a call. After picking up and there is no response on the other end, she returns to Cyan's room. When she's missing, at first she thinks she is hiding. After a minute, the realization that she was taken hits her. She calls the cops and suspects it is Spawn was at the heart of the kidnapping since he was recently at their house. When Terry rushes home panicked, he too begins thinking how Spawn, his once time friend Al, could possibly do something like this. Terry tells the officers where Rat City is so they can investigate.

The police arrived and canvas the alleys and find Cy-Gor.

Elsewhere, Clown colors in an alley with Cyan.

Spawn pressures Terry into making a final move against Jason Wynn using Major Forsberg's information. Later that day, Cyan appears to be kidnapped by Spawn. Confused and distraught, Terry and Wanda try to understand their relationship with Spawn and explain it to police as they search the alleys for Cyan. Wynn finds out that Terry is leaking information to Wynn's "clients." And a scared and hungry Cyan is forced to color pictures for the real kidnapper - the Clown.

Retrieved from "https://imagecomics.fandom.com/wiki/Spawn_Vol_1_59?oldid=59714"
Community content is available under CC-BY-SA unless otherwise noted.