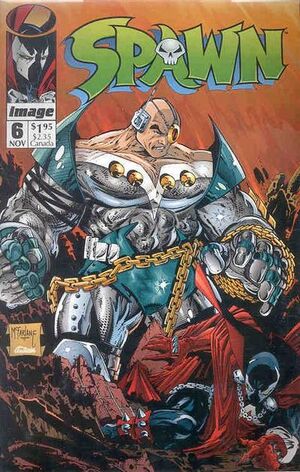 I love this job.

Appearing in "Payback, Part One"

Plot Synopsis for "Payback, Part One"

In Sicily, OvertKill takes down a building for the mafia. When the military shows up, he quickly dispatches them after taking several rounds of bullets and explosive damage. He leaves virtually unscathed.

Freddy, a hobo, gives up Spawn's location in exchange for drugs. However, the mobsters kill him before completing their end of the bargain. The mobsters report back to Antonio Twistelli.

Meanwhile, in the alley several homeless people offer comfort to Spawn. They invite him to sit next to them and share his story. They don't want Spawn to be afraid of them as he always sits aloof. Spawn tells them his backstory with Wanda and Cyan.

When two mobster start wasting random bums looking for Spawn, Al shows up and takes them out.

At a meeting with the mobsters, Gavino recommends Overtkill to take out Spawn.

That evening, the two square off. While Overtkill easily overpowers him, Spawn does trick him into messing up his robot hand before being rendered near-death. Spawn refuses to use his powers to spare them as long as possible so that he can continue to live on earth and ask questions about his past.

Overtkill walks away, unaware that Spawn is still alive. Spawn heals himself with his Necroplasm and heads to a warehouse to pick up guns and ballistics.

Retrieved from "https://imagecomics.fandom.com/wiki/Spawn_Vol_1_6?oldid=68322"
Community content is available under CC-BY-SA unless otherwise noted.