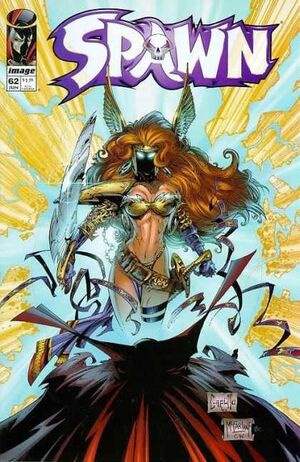 Appearing in "The Return"

Plot Synopsis for "The Return"

Victor Koslov, a Russian intelligence expert, was murdered in cold blood after distancing himself from the Central Intelligence Agency.

Spawn appears in Jason Wynn's apartment. He hold a gun to his head when Jason Wynn reminds him of the Executive Discretionary Directive, if he dies, so does a list of high-threat individuals. Spawn places Wynn down knowing he doesn't bluff. As a counter-argument, Spawn tells him he'll be in his office tomorrow. He can bring all the surveillance and guards he wants, he'll get in no matter what. And if anything happens to Terry Fitzgerald, he promises he'll kill Wynn instantly as well.

Meanwhile, the Fitzgerald family is visiting their friend's house. Mitch warns him that the neighborhood wants him out for the shooting[1] and the kidnapping.[2]

A swirling in sky forms from the melding of universes in the eternal triumverate.[3] Angela appears from its epicenter and sees a second jolt of energy emit from the epicenter. She follows it to find Spawn knocked down. She tells him about the Argus and how it is causing the spiritual universe to unravel. Suddenly, Angela is teleported out and Spawn spots two thugs robbing someone in the alley. After saving the homeless man, he sits down in the throne. He takes of his mask and it is completely restored to what it looked like before he became a Hellspawn.

Spawn confronts Jason Wynn, only to have his revengeful anger stymied once again. Wynn informs him that if he dies Terry, Wanda, and Cyan will be eliminated. Knowing that he doesn’t bluff, Spawn turns it into a Catch-22 situation. Later, in the alley chaos erupts when Angela and Spawn are thrown together to discuss the unraveling of the Universe. As Spawn rests from the ordeal, an unknown force heals his face to the one Wanda fell in love with. Meanwhile, a friend informs Terry of a neighborhood petition to force them out of the area.

Retrieved from "https://imagecomics.fandom.com/wiki/Spawn_Vol_1_62?oldid=59716"
Community content is available under CC-BY-SA unless otherwise noted.