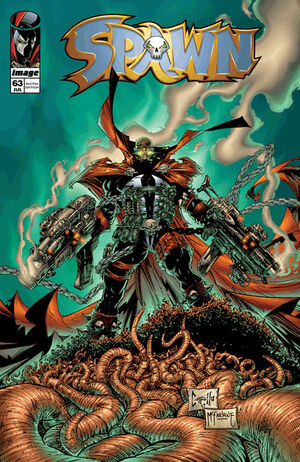 Spawn can barely believe his face has returned. He thinks the lightning bolt was targeting him for some sadistic reason but he wonders why.[1] As dawn hits, Spawn transforms his outfit into civilian street clothes so that he may blend in.

At CIA HQ, Jason Wynn preps his men based on Spawn's previous warnings. He tells them he wants no one to enter his building.[1]

Sam Burke and Twitch Williams receive a call from NYPD that there is movement at Wynn's building. They jump in the Crimemobile to check it out. Twitch is still unable to connect the dots but knows Spawn seems to be at the center of everything.

Spawn stops by Terry's house in Queens in civilian clothes. He tells him he's going to make a move on Wynn. When Terry protests they've worked too hard to bring him down methodically, Spawn reveals that Wynn already knows about Terry's actions. He tells him when he's done, he's coming back for Wanda, and Terry accepts they are now enemies if that comes to be.

Cogliostro tries to talk Spawn out of his raid as he's preparing but fails. Spawn takes off for Wynn.

A shaken Jason Wynn tells his security about a "terrorist threat" on his life and they reinforce the area. Meanwhile Spawn’s face has healed itself. Although startled and confused about his new turn of events Al forms plans to further intimidate Wynn to ensure Wanda’s and win her back. When Al tells Terry of his plans a rift grows between the two old friends. Later, Cog counsels Spawn to reconsider his decision. Elsewhere in the city as Sam and Twitch are pondering how some previous cases are tied together they receive a hot tip and head to Spawns’ Alley.

Retrieved from "https://imagecomics.fandom.com/wiki/Spawn_Vol_1_63?oldid=67504"
Community content is available under CC-BY-SA unless otherwise noted.