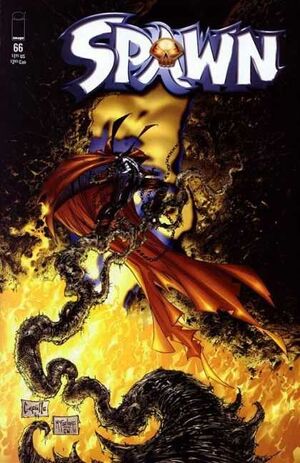 Cogliostro gets into the Crimemobile with Sam Burke and Twitch Williams. He continues to tell them that they will help Spawn recover his humanity. As they pass through a tunnel, Cog suddenly disappears into the shadows confusing Sam and Twitch about the forces they are working with.

In Queens, New York, Cyan Fitzgerald plays with Shanna. When Shanna takes Cyan's pacifier with Spawn's shoelace, Cyan freaks out and is only consoled when Wanda Blake hands her the pacifier again.

Spawn struts through the streets thinking he still looks human. However, several thugs give him a hard time and he realizes his face has returned to the puss and boil scarred appearance again. He retreats into the alleys and heads to Terry Fitzgerald's office. When Terry leaves, he pulls him aside and tells him he'd be willing to go after Wynn the political route with him again. Terry is hesitant and tells him to go to Hell since he had just announced they were enemies and that he would take his wife Wanda back.[1] Spawn tells him he can't be seen like this and Terry presses him by calling his wife. When Spawn disappears and refuses to take the call due to shame, Terry talks to her and tells her he's like to spend time with her.

Spawn wallows in pity in the alley and Cog warns him this is what Malebolgia wants; confused and angry. Spawn stabs himself over and over again with a broken window pane in frustration that he can't die. As Cog leaves, he summons the bats and worms to heal him. After he recovers, he feels faint and passes out slightly, dropping his 400lb body on a bum. As he recovers, he wonders what happened to him as a worm crawls out of his costume which Cog had warned him would suck out his soul. Spawn writes it off as he might have just been sick and moves on.[2]

Cog agrees to accompany Sam and Twitch back to their office to answer some additional questions but vanishes from the moving ’55 Chevy. Back in Rat City Al prepares for his reunion with Wanda like an eager groom. When he discovers that his face has returned to its burned appearance he vents his anger and rage. Cog counsels Al and points out his mission on Earth. Later, still stung by Al’s claim for Wanda, Terry is uncooperative when Al tells him he would like to continue his plans to bring down Wynn. Meanwhile, Wanda begins to wander about Cyan’s bond to the soother – on - a –shoelace when she becomes enraged when their dig Shanna snatches it away from her.

Retrieved from "https://imagecomics.fandom.com/wiki/Spawn_Vol_1_66?oldid=59719"
Community content is available under CC-BY-SA unless otherwise noted.