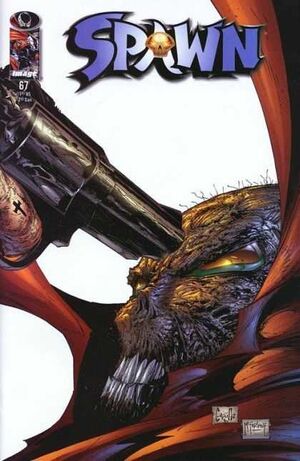 In the Bowery Alleyways, bums Bobby and Johnny exchange words about religion. Bobby cherishes his trinket and believes if he pushes good he will be rewarded. Johnny believes religion is silly and untrue. Spawn arrives and weighs in on the discussion. He believes that there are shades of gray to both. That God isn't necessarily good or evil and same for Lucifer. Johnny knocks Bobby's trinket out of his hands and storms off.

At Sam and Twitch's Private Investigators Office, Sam Burke and Twitch Williams discuss how they could create a trap and lure Spawn, and potentially Cogliostro into it. They would then ask them questions about all the secrecy and info they've had as of late. Suddenly, Mrs. Byrd knocks at the door, a half-lunitac but paying client of theirs and Sam hides in the bathroom to let Twitch do the heavy-lifting.

At the alleys, Spawn trails John to find him hanging out with some other bum croonies. He tells them they'll knock off a pawn store and then blame it on one of the religious fanatic bums. Spawn emerges from the shadows and asks if its really worth selling a life for 72 hours of money and joy. Johnny turns with guns blazing and lets off a round directly into Spawn's body knocking him back. Spawn is stunned that his suit isn't doing anything to protect him. He is then shot in the head by Johnny, blowing his brains out.

The bums gather to commiserate on their lives and share stories on their philosophical and religious beliefs. Spawn diplomatically joins the conversation and avoids heating up the age-old debate of God vs. The Devil. Later, in another part of the alley a gang of bums plan to rob and kill one of their own. When spawn steps in to question their motives, they open fire on him. He collapses, wondering why his costume didn’t protect him against the assault.

Retrieved from "https://imagecomics.fandom.com/wiki/Spawn_Vol_1_67?oldid=49610"
Community content is available under CC-BY-SA unless otherwise noted.