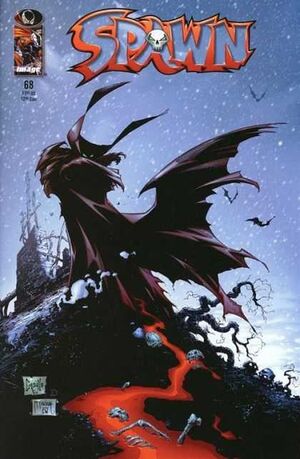 Sam Burke and Twitch Williams receive a call. They arrive to the scene of the crime and find Mr. Byrd, dead. A bullet hole in his head and no signs of a struggle perplexes them. They hear a noise and find Mrs. Byrd in the next room casually watching a TV program with a handgun sitting next to her.

As she's hauled away, Twitch thinks there might be more to the story. She may be feigning psychosis to get away with easy time off in jail. He decides he'll check into Mr. Byrd's business accounts later. They agree to head back to the office. Cogliostro surprises the duo by being in their Crimemobile. Cog warns them he is in a dangerous place where his powers don't work. He urges them to head there immediately and gives them Mr. Byrd's files so they don't have to look it up themselves.

Meanwhile in Rat City, the rogue bums attempt to drag Spawn's ponderous body out of the alleys after shooting him.[1] Eric runs back to Bobby and tells him what John Leekley, the bum has done. As Bobby storms after John with his entourage, another bum approaches Eric and beats Eric to death for squealing.

Boots soon chickens out and drops out of the group, heading to attack Johnny.

Elsewhere, Johnny approaches The Freak and tells him he's successfully killed Spawn. He tells him he moved the body for all to see. The Freak stabs him in the eye and rebukes him for not obeying commands. He rejoices that a war is coming between the alleys.

Retrieved from "https://imagecomics.fandom.com/wiki/Spawn_Vol_1_68?oldid=47806"
Community content is available under CC-BY-SA unless otherwise noted.