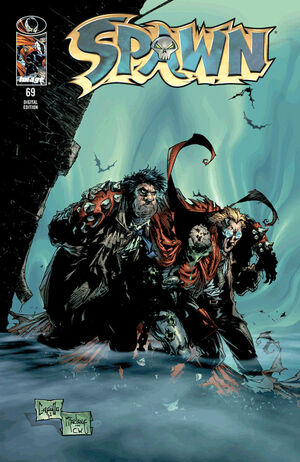 Sam Burke and Twitch Williams scour Rat City until they find Spawn, weakened and battered. They are terrified at the thought of someone taking out a near-invincible opponent.

Cogliostro approaches Boots. He tells him he knows he's actually an agent of Heaven. Boots finally drops the act and tells him he has his orders to watch and not react. They storm off in their separate ways.

Sam and Twitch pry Spawn's body out from the wall and struggle to move it due to its weight. Bobby and his entourage appear and mistake the detectives as the people who killed Spawn. As a standoff occurs, Sam and Twitch pull out their guns causing the homeless to freeze. The Freak appears behind Twitch and holds a knife to his throat. He orders Sam to drop his weapon.

Unknown to him, flies, rats, and worms scurry to Spawn's suit. He stands up reborn and the Freak is terrified that the dead man rises.

Retrieved from "https://imagecomics.fandom.com/wiki/Spawn_Vol_1_69?oldid=47862"
Community content is available under CC-BY-SA unless otherwise noted.