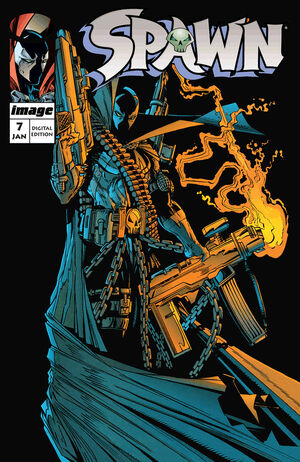 Let me ask you a question, boy. Why you always paradin' around in that queer lookin' outfit?

Spawn hurries his scavenger mission as US troops burst into the room. Rather than fight them, he teleports away to save their lives.

Re-appering in the alley, a drunk bum helps him and offers him alcohol. When the bum takes off Spawn's mask he's not too surprised by Al's look. Spawn realizes they accept him and don't care about outside appearances. Spawn cries out and experiences a flashback, he can't recall his killer's face but is given hints. He keeps seeing pictures of the grim reaper in his mind. The grim reaper tells him it was a pleasure killing him and he would have done it even if he wasn't getting paid for it. Snapping back to reality, he runs from the alleyway.

Gravano asks who OvertKill will work for if Bartino dies.

In Queens, New York, Wanda Blake wakes up screaming, "Stop! Don't kill him!" Terry Fitzgerald comforts her and tells her he'll check Al's files again when she pleads that he was murdered and didn't die in action.

Spawn decides to take on the Mafia. He takes off the cape as it would only get in the way. Unknown to him, the cape follows him as he walks away.

Wanda is curious about when Al visited her in disguise.[1] When she checks at the local pound, she learns that no man matching her description of the man works there. She begins pondering if Terry is in trouble and the man was spying on them.

Spawn breaks into a highrise mob building where he threatens Gravano. He tells him to deliver a message to Overtkill to meet him in battle at the nearby park.

Overtkill shows up at the park and is quickly destroyed by the ballistics Spawn brought with him.

Retrieved from "https://imagecomics.fandom.com/wiki/Spawn_Vol_1_7?oldid=65689"
Community content is available under CC-BY-SA unless otherwise noted.