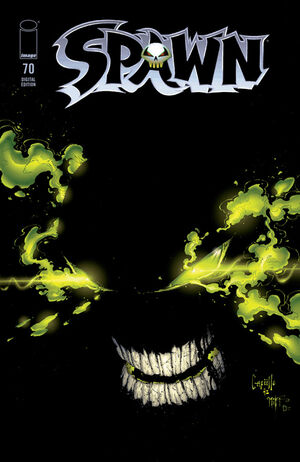 When Spawn reappears, Twitch Williams takes the distraction to break free from his captor. Spawn unleashes a fury of bats and rats from his cape. A riot breaks out between the homeless troops as they scream bloody murder and engage in a blood battle. Spawn finds that in certain areas, his suit goes limp. He begins to become aware of this area and decides to stay out of it. He heads after The Freak and finds him laughing. He unleashes the creatures of evil on him and let his own fear conquer himself as he walks away.

Even though his orders were to only observe, Boots pulls Bobby out of the fight and into safety.

As Wanda Blake drives Cyan Fitzgerald down a busy highway, Cyan accidentally looses her pacifier with the shoelace string out the window. Cyan screams blood murder until Wanda is forced to pull over. Cyan leaps out of the car for the pacifier and is completely calm once she gets it back. Wanda thinks how this is the second time her daughter acted like she was possessed when loosing the pacifier.[1]

Retrieved from "https://imagecomics.fandom.com/wiki/Spawn_Vol_1_70?oldid=59720"
Community content is available under CC-BY-SA unless otherwise noted.