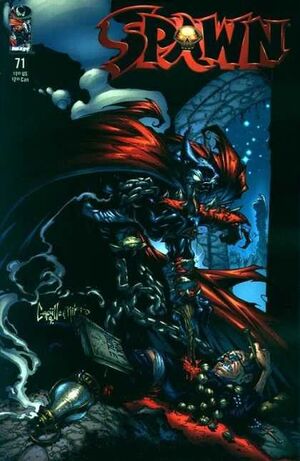 The Freak reaches out in pain as his last moments reach him with Spawn's creatures of evil surrounding him. Cogliostro approaches and tells him he can't keep giving into darkness and killing. Spawn says he got what he deserved and if he doesn't have the answers, to stay away from him.

In Queens, New York, Cyan Fitzgerald sleeps with her pacifier peacefully. As Terry Fitzgerald returns home late once again, Wanda Blake verbally attacks him. She wants to know what happened to her husband and tells him to start paying more attention to his family.

Sam Burke and Twitch Williams exit the alleys and talk about how it almost seems mystical the way they can get lost inside them. As they exit, they're told to get lost by the New York City Police Department since they aren't a part of the group anymore.

Sam takes them to a strip club. He tells them they can relax there but as they open the doors, they walk into a bar brawl. They see a man trying to abscond with a hooker and give chase to him. Outside, they find the man has vanished and the stripper lies dead in the alley with her throat ripped out.

Meanwhile, 10 blocks away the police collect evidence and canvas the alleys with many bums lying dead from the turf war.[1] Spawn watches from behind a boarded up wall when he is suddenly attacked by a vampire. The vampire pushes him into the Dead Zone where his costume goes limp once more. Boots breaks in and tells the Vampire their side can't have him dying on them.

Retrieved from "https://imagecomics.fandom.com/wiki/Spawn_Vol_1_71?oldid=67508"
Community content is available under CC-BY-SA unless otherwise noted.