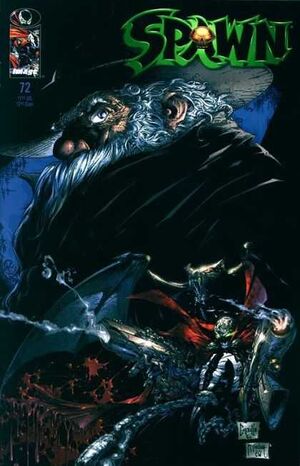 In the Dead Zone, Boots breaks up the fight between Wolfram and Spawn. The two mince words but take off when the police appear leaving Bootsy behind to pretend to be a regular street bum.

At New York City Police Headquarters, Sam Burke and Twitch Williams type up the report of the dead stripper they found.[1] Bootsy is dragged in by fellow officers. Bootsy warns Sam and Twitch to protect the Hellspawn, he will need it and in return he will provide protection to them. Sam and Twitch look at each other and find themselves more confused.

Later at a diner, they hash out their cases of Chief Banks, Billy Kincaid, Antonio Twistelli, and Jason Wynn. Not only do they all have Spawn in common, but it also has them in common. They begin to question whether it's truly coincidence.

Street bum Eddie Beckett walks through the alleys morning his wife's death at cancer. He finds the bag of Necroplasm left behind by The Freak.[2]

Spawn responds to the cries of a small boy who is about to be tortured and electrocuted by several assailants. Spawn breaks in through the window and demands the boys' release. The assailants turn off the lights and their eyes glow red as they reveal their fangs. Spawn lays waste to them and takes off after freeing the boy. The boy lifts up his shirt to look at his brand of Heaven. A deep laughter can be heard as Spawn doesn't know which side he fights for.

Retrieved from "https://imagecomics.fandom.com/wiki/Spawn_Vol_1_72?oldid=67509"
Community content is available under CC-BY-SA unless otherwise noted.