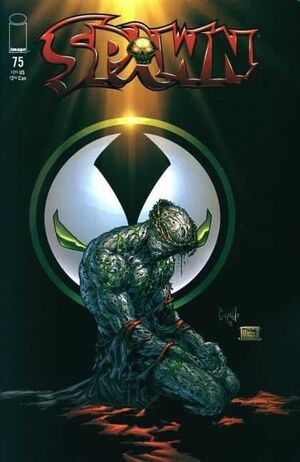 Spawn emerges in the world of Greenworld and finds his powers are missing. He holds onto his Hellspawn Sigil and is confused as to what is happening to him. The Keeper approaches him and rebukes him for not thinking larger. He orders he stop resisting as his powers are useless. The Keeper tells him the petty war over souls between Heaven and Hell do not concern him, however he wants him to stop the oncoming war. The keeper then warns Spawn that if he doesn't stop the war, they will destroy the entire human race so that Heaven and Hell have no souls to fight over.

In Rat City, Boots and Cogliostro argue about whether Spawn has died or has vanished. When Bobby and the other bums approach, Boots tells them to get their prayers in order and prepare for the end. Boots then begins a payer and breaks the Sigil. Spawn is beamed back to earth.

In Queens, New York, Terry Fitzgerald and Wanda Blake are surprised when their daughter suddenly enters a seizure and begins foaming at the mouth. She stops once Spawn returns to earth.

Several Warrior Angels beam down to earth and demand for Belazikkal, Bootsy, to return with them. He had violated the code of conduct and interfered with the lives of mortals. Boots thanks Bobby for teaching him how to love and leaves with them. As he's carried off, he warns Spawn that he may not have made the deal with Malebolgia and he needs to look to the child in the future.

Retrieved from "https://imagecomics.fandom.com/wiki/Spawn_Vol_1_75?oldid=61068"
Community content is available under CC-BY-SA unless otherwise noted.