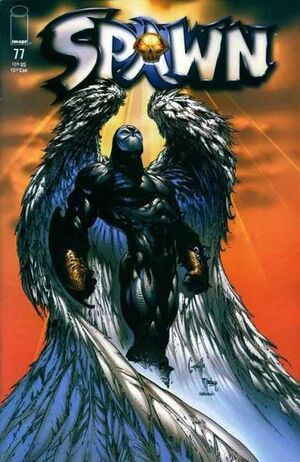 Spawn demands to know the truth from Cogliostro. He doesn't understand why he suddenly is aware of everything that is happening, all the murders, the death, he sees everything. Cogliostro responds in another riddle which is the straw that breaks the camel's back. Spawn lashes out and holds Cog upside down over the edge of the building and threatens him to tell him the truth. Cog admits maybe he is ready for the truth.

Meanwhile, Bobby wanders the alleys searching the truth about what happened with Boots.[1] His friend Whistler says he doesn't know anything about it as he goes about pan-handling. A man hands him a dollar. A minute later, Sarah Frost walks by and hands Bobby a card to her business, Saving Grace.

Cog walks Spawn into a Church where he spends time in the Hellspawn Archives. He informs Spawn he's learning to intuitively tap into his powers. Inside, Spawn is attacked by Immaculata's Ceremonial Headdress. After subduing the headdress, Cog informs Spawn he once was a Hellspawn as well but now walks the line between Heaven and Hell where neither side claims him. He found a way to separate himself from the symbiotic necroform suit, but has since become immortal to wander the living realm. He bears the mark of Malebolgia on his chest and asks for Spawn's help in freeing him from the evil master. If Spawn takes over Hell, he can stop the Armageddon war and become the new king, freeing all the souls from Hell, at the cost of remaining trapped there forever. Suddenly, Spawn receives a painful vision and is crippled to the floor.

At Sam and Twitch's Private Investigators Office, Sam Burke and Twitch Williams prepare to head out and find Spawn. They run into Bobby outside the Saving Grace office. When they get out to question him about Spawn's whereabouts. Bobby walks away from them claiming ignorance. He finds Whistler but is shocked to see he has been murdered.

As Sam and Twitch walk on, they are suddenly shot at by the man who gave them the dollar earlier. Sam takes him down but turns to find his friend, Twitch, has been shot in the head and bleeds out on the alley floors.

Retrieved from "https://imagecomics.fandom.com/wiki/Spawn_Vol_1_77?oldid=67514"
Community content is available under CC-BY-SA unless otherwise noted.