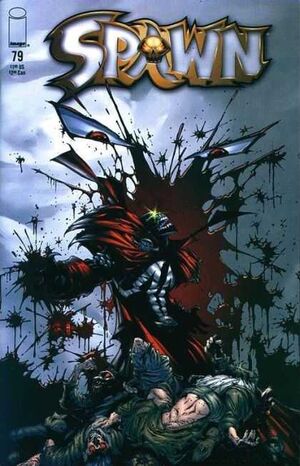 Ethan Crone, a wealthy writer, writes about the homeless murders and find them fascinating.

At the police station, Detective S.O. Silbert grills Bobby for information on the killings. They think he's a suspect and verbally torture him for a confession. After they leave, he pulls out the Saving Grace card he was given by Sarah Frost.

Silbert runs into Sam Burke in the halfway. He asks Sam if he knows anything about someone Bobby mentioned, Spawn.

Spawn checks out the most recent murder scene. When he's spotted by several officers he teleports away.

Sam had dinner with Sarah Frost.

Meanwhile at a press conference the NYPD have no new information for the public on the killer. Spawn becomes listless with Cogliostro, telling him he's failing at protecting his people. Twitch tells Sam there's one lead and that's all the victims had seen Sarah Frost. He asks Sam to see if Sarah knows anything about it.

At Saving Grace, Sam arrives decked out and with flowers. He's disappointed that they are closed. He hears a sudden noise and spots Bobby. When he sees Bobby has drunken to much and needs help, he breaks into the clinic. Inside, he find a small shrine to the homeless killings and several of the missing body parts from the victims.

Retrieved from "https://imagecomics.fandom.com/wiki/Spawn_Vol_1_79?oldid=48978"
Community content is available under CC-BY-SA unless otherwise noted.