"In Heaven (Everything is Fine)" 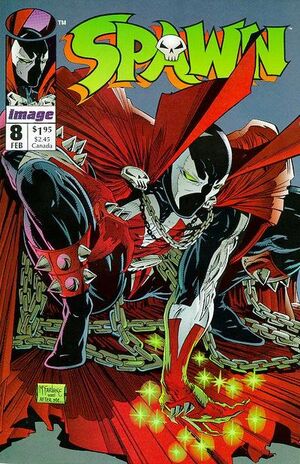 Sorry about entrappin' ya like that. I just hadda make sure you wuz the kinda guy we wanted up on the eighth sphere...

Appearing in "In Heaven (Everything is Fine)"

Plot Synopsis for "In Heaven (Everything is Fine)"

Billy Kincaid is reborn in Hell. He drops out of a green goo and immediately kills animals to cover his naked body. He is continually and randomly terrorized by flashbacks of Spawn killing him.

He runs into a half-naked woman and small group of individuals. A small girl explains to them about the culture of hell as they are systematically picked off. A Soul-Trapper takes people off to the Sixth Sphere of Hell to sing for them. Others are picked off by the Prime Nomad to serve as hardware in a macro computer on the 10th, and highest sphere of hell.

As Billy sleeps, he's continually haunted by the vision of Spawn and wakes up. As he looks at the small girl, he decides to kill her to satisfy his itch. The girls sheds her skin and congratulates Billy for finally passing the test.

The Vindicator reveals his true form as one of the five Phlebiac Brothers. He escorts Billy to the Either Sphere of Hell where he will serve in Malebolgia's army. When Billy sees the costume he has to wear resembles Spawn's, he freaks out and runs away. Vindicator casually explains the suit is a K3-Myrlu suit that is a continually evolving parasite that will combine with his central nervous system for life.

Retrieved from "https://imagecomics.fandom.com/wiki/Spawn_Vol_1_8?oldid=68597"
Community content is available under CC-BY-SA unless otherwise noted.