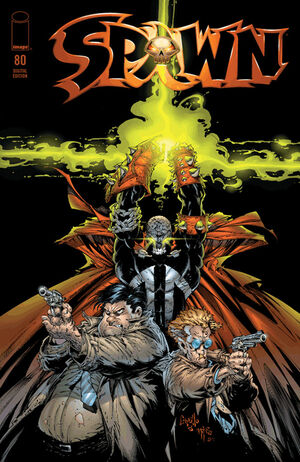 Appearing in "The Cleansing"

Plot Synopsis for "The Cleansing"

Albert Simmons, Sam Burke, and Twitch Williams meet on a rooftop. Sam tells them he positive he's found the killer. Spawn tells them to call the cops in 30 minutes.

At Sarah Frost's apartment, Sarah gets out of the shower, her 7th for the day. When she spots several bugs she enters a panic attack. Upon regaining her sences, she sees Spawn lurking over her from the shadows. Spawn forces her to see the wrongdoings. She's forced to see the pain she caused to her homeless killings. She continues seeing bugs crawl all over her so she unloads can after can of bug spray on them and herself.

Outside, Sam and Twitch discuss who is there for them. Sam laments that he had no one for him.

Later, Detective S.O. Silbert welcomes Sam and Twitch to the scene.. He remarks he can barely believe they solved the case. They walk into the bathroom to find she's poisoned herself with bug spray. Sam takes a closer look and find a mark behind her ear. The same as the one found behind the man who shot at them earlier.[1]

Later, Cogliostro warns Spawn he doesn't think it's over. There is more to the making then they know he warns.

Sam and Twitch are made city heroes for cracking the case. As they arrive back to the office, they find a package waiting for them. They are shocked to find a dead man's head inside. They spot a warning message stating they've bagged the wrong person and they're back. The message was signed "Billy. "

Retrieved from "https://imagecomics.fandom.com/wiki/Spawn_Vol_1_80?oldid=53603"
Community content is available under CC-BY-SA unless otherwise noted.