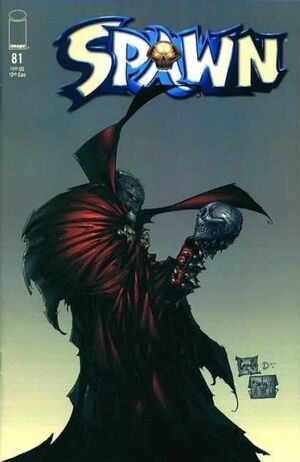 Appearing in "The Devil Inside, Part 1"

Plot Synopsis for "The Devil Inside, Part 1"

Mark Lucas sneaks into his father's home office later at night. He uses a paperclip to unlock a drawer containing a hand-held pistol. The next day he snaps at church and murders the priest and several others with the gun. The ghost of Billy Kincaid watches the horror unfold.

Spawn is haunted by a strange and still familiar feeling. He becomes agitated at being unable to locate the source.

Sam Burke and Twitch Williams continue to ponder why they got the severed head in the mail and if the, "Billy" could truly be Billy Kincaid.

Meanwhile, Mark is huddled in a alley corner. He prays it was a bad dream but his friend tells him the cops are looking for him.

In a restaurant, Ethan Crone meets with his agent. He informed her he has become interested in the urban myth of Spawn. He find it fascinating what people choose to believe in and plans on writing his next book on it.

At the Hellspawn Archives, Cogliostro informs Spawn he has identified the brand from the shooter of Twitch and Sarah Frost. He tells him it is from the Serpentine Addendum. He tells Spawn it is a demon tricking people into performing their darkest desires. Worse yet, the people are held accountable and sent to helm for their crimes and he has no idea how to stop it.

Twitch wanders the streets afraid to go home. He thinks about the problems he's had going PI and how his wife hasn't been supportive due to money. He's afraid to tell her he was wrong about busting the Exterminator.

At the Holy Redeemer Church, Mark says his final prayers as he commit suicide.

The ghost of Billy Kincaid asks Spawn if he wants to make a donation to his collection. Spawn turns to see the ghosts of Mark, Sarah, and Twitch's shooter standing with Billy.

Retrieved from "https://imagecomics.fandom.com/wiki/Spawn_Vol_1_81?oldid=67516"
Community content is available under CC-BY-SA unless otherwise noted.