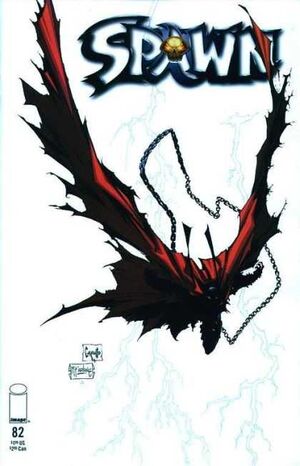 Appearing in "The Devil Inside, Part 2"

Plot Synopsis for "The Devil Inside, Part 2"

Billy Kincaid tells Spawn he's made a deal with Malebolgia. Spawn's chains suddenly attack him and immobilize him. Billy threatens Spawn, informs him he'll be back and there will be more people dying.

Later, Twitch Williams approaches Spawn and tells him about the head Billy Kincaid left him. He informes Spawn he was able to find him since he's had a psychic connection with him ever since the accident.[1] He consoles Spawn and tells him he knows his background and about Wanda Blake. He relates to him as he's grown distant from his family with all the long hours he has been putting in at work.

Helen Williams rides the train with one of her sons. A man with a vacant expression let's lose a gunshot and instructs everyone the train will now be delayed.

Meanwhile, Ethan Crone let's a hooker into is apartment but is too busy writing about Spawn to give her the time. A sudden TV newscast about a subway hostage situation catches his attention.

The crazed man offers Helen a chance to live if she cuts off her sons ear. Spawn suddenly attacks and attempts to exorcise Billy from the man but ends up killing him instead. He spots the Serpentine Addendum mark on the man's neck. Helen looks up to see Spawn for at the last moment before he takes off.

The next day in Queens, New York, Wanda Blake heads into Granny Blake's house while Cyan Fitzgerald and Granny stay on the porch to play. Granny suddenly senses the presence of Billy Kincaid and stands up screaming for him to disappear. Billy promises to return for Cyan.

Retrieved from "https://imagecomics.fandom.com/wiki/Spawn_Vol_1_82?oldid=49103"
Community content is available under CC-BY-SA unless otherwise noted.