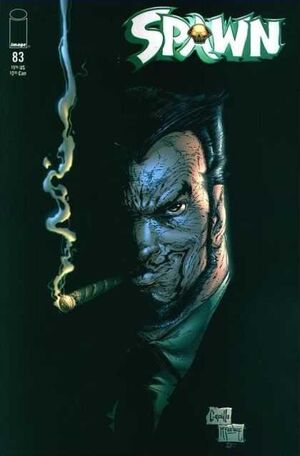 Appearing in "The Conqueror"

Plot Synopsis for "The Conqueror"

Ethan Crone writes about man's desires. Normally we ignore the staffing of our best friends to get ahead, but every once and a while we listen. He writes about a lunch lady, a manager, and an off duty police officer who recently snapped killing innocent civilians.

Spawn leaps between rooftops in the city. He thinks about how he made Billy Kincaid stronger by killing him. He begins to see his actions have ramifications. He stops by Sam Burke and Twitch Williams and asks them to hurry up and some this case with Kincaid. Twitch retorts they have no experience in the supernatural.

Agent Raleigh informs Jason Wynn that a shipment was jettisoned to avoid being caught. After he leaves, Wynn calls for Raleigh to be "erased". He did in his chair frustrated with his reassignment to a special task force. He suddenly receives visions of Ghengis Khan. He believes it is time for action instead of planning as he receives primal instincts.

Jason Wynn walks in to a dinner with a vacant stare. He has visions of being Ghengis Khan and an invading army. He behind shooting everyone in the place and sets it a blaze as he walks away.

Later, Jason wakes up in an alley. He wakes up confused on what happened and pulls out a phone to call for help. He's suddenly attacked by street thugs and robbed.

Spawn heads to the Dead Zone and curses at Heaven for allowing this mess. Cogliostro approaches and tells him they need to talk.

Retrieved from "https://imagecomics.fandom.com/wiki/Spawn_Vol_1_83?oldid=54812"
Community content is available under CC-BY-SA unless otherwise noted.